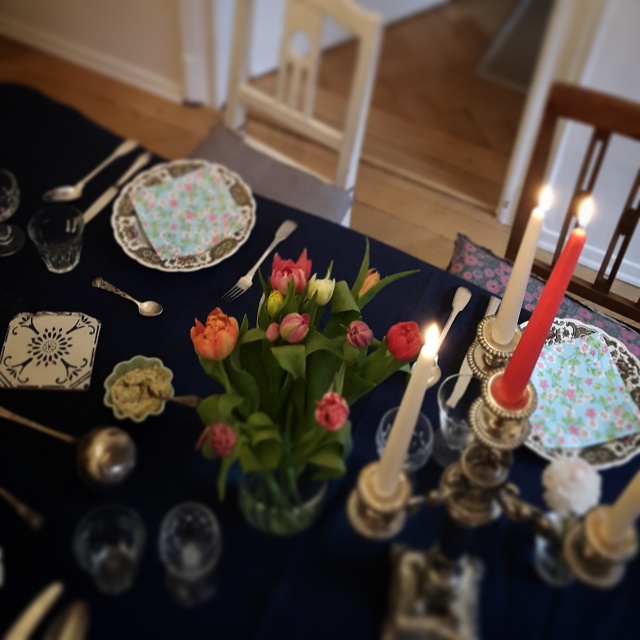 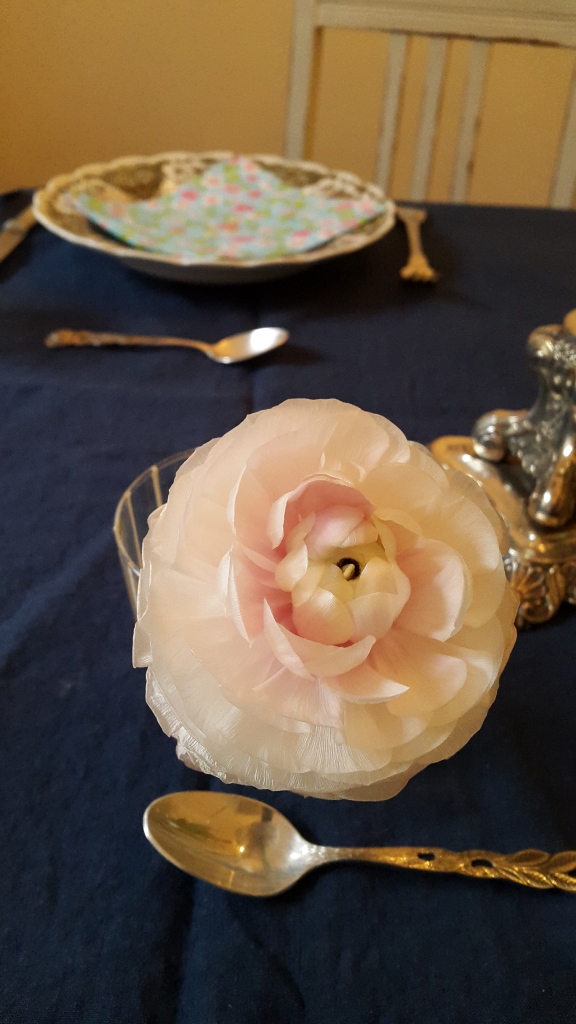 Only when the day is fixed, the guests are invited, the ideas for the menu are coming. You have to jump into the water. And during the process of baking, preparing, looking at cookbooks, everything is changing again. The starting idea was only a package of 500g italian almonds.

With four guests of the orchestra of the opera the evening was a total success. Only the timing for a easter menu six days before easter sunday wasn’t perfect. But nobody cared about it, because we have a lot of work during easter. 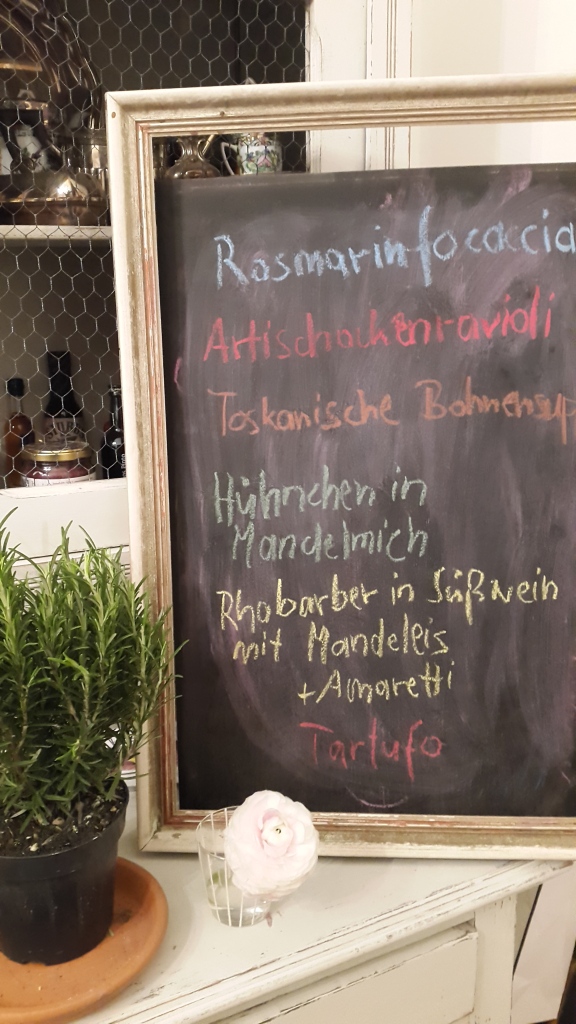 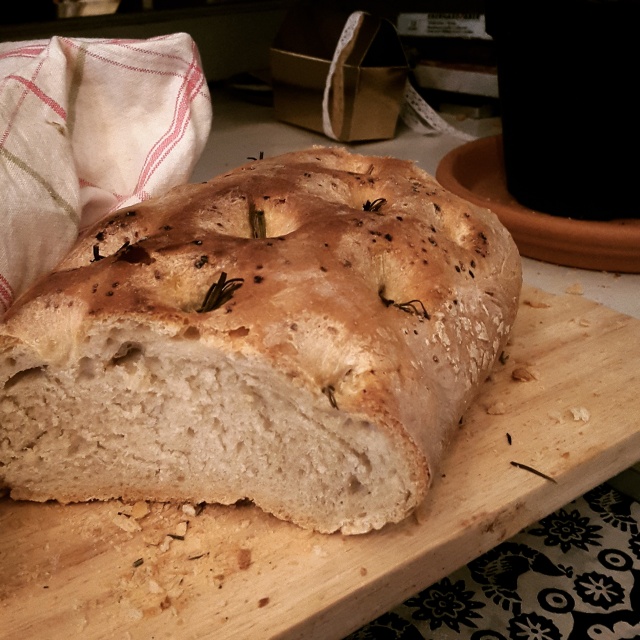 Dissolve the yeast in the water in a large bowl. Add 500 g flour with an electric mixer. Cover and leave for about an hour until doubled in size. Knead in the rest of the flour and the salt for 5 minutes. Brush the bowl with oil and leave the dough for about two hours.Then form two equal loaves, put them on a baking tray an leave again for half an hour. Poke several wholes with oiled fingertips and put some salt and rosemary sprigs in them. Bake in the preheated oven ( 200° ) for about 45 – 60 min.

The evening before cover the beans with a lot of water. The next day drain the beans, put them in a bowl with the sage leaves and 3 garlic cloves, cover with water and bring to a boil. Simmer for about 1 1/2 hours until tender. Puree without garlic cloves and with some of the sage leaves and set aside. Heat the olive oil in a large pot, add the onion and the fourth garlic clove until tender. Then add the vegetable stock and the tomato puree, bring to a boil and then fold in the bean puree and the almond milk. Season with salt and pepper. 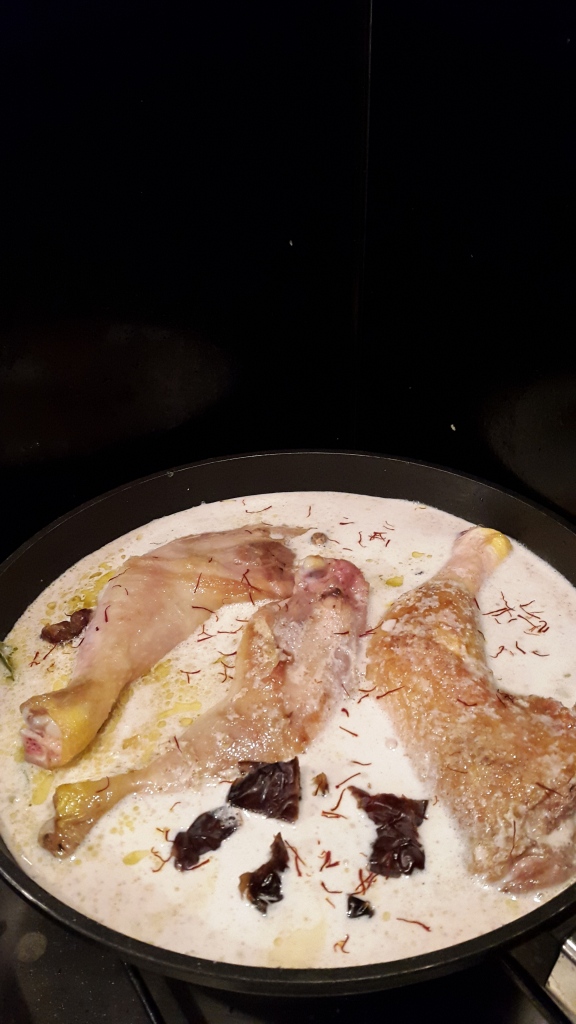 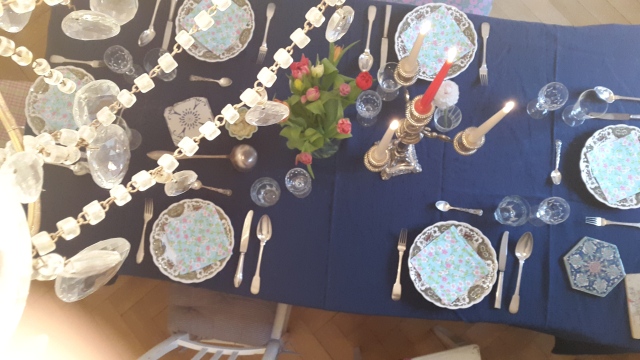 Brown the chicken legs in 3 tbsp olive oil in a pan, season with salt and pepper and set aside. Heat the rest of the olive oil in a big pan with a lid and add the onion. When the onion is tender ( about 5 min. ),  add the ginger, garlic, bay leaves and spices and the chicken legs. Cover with the almond milk. Add the dates and saffron strand. Simmer for about an hour. Put the bones away and serve with the almond sticks.

Mix together all the ingredients in an ovenproof dish und put in the preheated oven ( 200° ) for 20 min., until the rhubarb is tender. Set aside to cool.

Bring the sugar, water and vanilla extract to a boil. Meanwhile whisk the egg yolks with an electric mixer, While mixing add the syrup , until the mixture cooles down. Then fold in the almond milk and the cream and leave to cool in the refrigerator. Put it into an ice cream maker.

Combine the dry ingredients in a bowl. Beat the egg whites until stiff and then add to the dry ingredients, as well the hazelnut paste. Form small balls, roll them in icing sugar, flat down a little and put an almond in it. Preheat the oven to 150° an bake for 14 minutes. 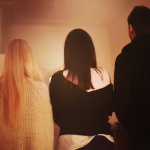 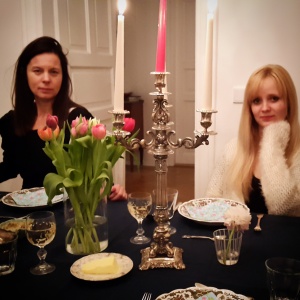